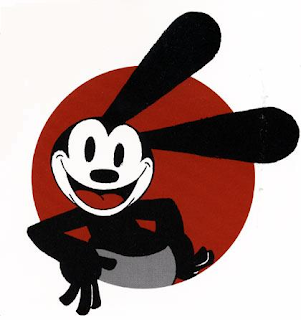 In 1927, Walt Disney and, his friend and collaborator, Ub Iwerks, after the bankruptcy of his Laugh-o-Gram Studio and move to Hollywood, embarked on a new adventure with Universal Studios.  Universal was hungry to get into the animation business so Disney's distributor Charles Mintz suggested that he and Ub create something that they could sell to the studio. Hungry to get back in the game, Walt signed a contract with Universal and soon Oswald the Lucky Rabbit was born.
After a failed attempt with the cartoon "Poor Papa", the duo created the cartoon "Trolley Troubles". Released on Sept 5th, 1927, the short was a huge hit and shot the character to stardom. Oswald became one of the first characters to show real personality using physical comedy to solve situations. It's said that his courageous and adventurous side was based on Douglas Fairbanks. In the spring of 1928, with Oswald proving to be a big money maker for Universal, Walt traveled to New York to negotiate with his producer Charles Mintz for a higher paycheck. Instead of more money, Mintz instead offered Walt a 20% pay cut due to an economic downturn. Walt wasn't going to have it and quit, making that famous return trip to Hollywood that would result in a creation that would make Disney a household name around the world. Mintz, now armed with the creative force of most of Disney's staff, continued to produce Oswald cartoons including the first sound cartoon in the series. Walt had created 26 shorts and Mintz followed with 26 more before Walter Lantz (eventual creator of Woody Woodpecker) took over in 1929. Lantz consulted with Disney before he started and soldiered on with his blessing creating a total of 142 Oswald shorts before the rabbit made his final appearance alongside Woody Woodpecker in 1951's The Woody Woodpecker Polka. Over the years, Oswald would have several different looks and his voice would be provided by several different voice actors, most notably Pinto Colvig (Goofy)  and Mickey Rooney.
In February 2006, Disney CEO Bob Iger initiated a trade with NBC Universal in which the rights to Oswald were acquired in exchange for sending sportscaster Al Michaels from ABC Sports (owned by Disney) to NBC Sports. The deal included all of Walt's original 26 shorts but left the rest in control of Universal. Since reaquiring the rights, Disney has done a small relaunch of the character with merchandise and most noticeably the Epic Mickey video game franchise. Epic Mickey 2 also gives Oswald a voice for the first time in a Disney production with the vocal talents of Frank Welker. So today, we say Happy Birthday to Oswald the Lucky Rabbit, may there be many more.