Today we celebrate the birthday of one the most influential comic book creators of all time, the duck man, Carl Barks. Born March 27, 1901, Carl got his start in 1935 working as an inbetweener on Disney animated shorts. By 1937 he worked his way up to story man and along with Jack Hannah collaborated on such cartoons as  Donald's Nephews (1938), Donald's Cousin Gus (1939), Mr. Duck Steps Out (1940),Timber (1941), and The Vanishing Private (1942). While at the studio he tried his hand as a comic book artist, contributing half the artwork for a one-shot story (the other half done by Jack Hannah) titled Donald Duck Finds Pirate Gold. Bothered by ongoing allergy problems caused by the studio's air conditioning, he left in 1942.  He decided to start a chicken farm but in the meantime, to acquire funds, contacted Western Publishing, the publisher behind Pirate Gold, to see if they had any need for Donald Duck comic book artists. He was immediately assigned a ten-page Donald Duck story for the monthly Walt Disney's Comics and Stories. That first ten-page story published in April, 1943 was the first of over 500 stories featuring the Disney ducks he would create over the next three decades up till his retirement.  Prior to 1960, Disney comic artists worked anonymously and all their work would simply say "by Walt Disney". His work was so outstanding that regular readers began noticing that this particular creators work was far better than any other duck artist out there and thus began referring to him as "the good duck artist", the name stuck even after the publisher began printing his name with his stories. Legendary writer-artist Will Eisner called him "the Hans Christian Andersen of comic books."  He created the town of Duckburg and surrounded Donald Duck and his nephews with an abundance of supporting characters, such as the richest duck in the world Scrooge McDuck, inventor Gyro Gearloose, the Beagle Boys, Donald's extremely lucky cousin Gladstone Gander, the sorceress Magica De Spell, Scrooge's rival Flintheart Glomgold, and Daisy's nieces April, May and June just to name a few. Barks retired in 1966 but continued writing and contributing a new Donald or Scrooge story every now and then. He also took up oil painting, converting many of his famous covers into a fine art format. He continued producing artwork up till his death on August 25th, 2000 at the age of 99. His work inspired comic creators, animators, movie makers, and even scientists. Both George Lucas and Steven Spielberg credit Barks' stories as helping to influence Indiana Jones. In fact, they pay homage to those stories with the opening sequence of Raiders of the Lost Ark. That famous rolling ball sequence came from the classic Scrooge story "The Seven Cities of Cibola" . Also, you must not forget, there would be no Duck Tales without Carl Barks. 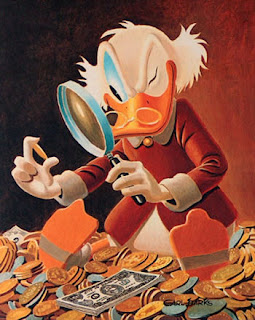 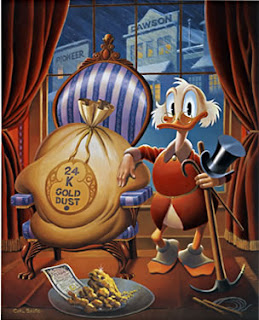 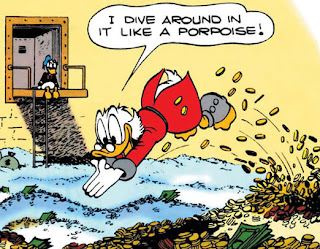 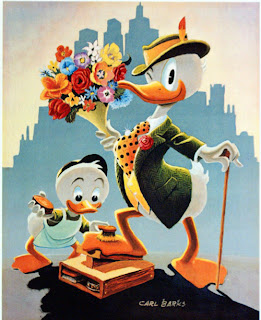 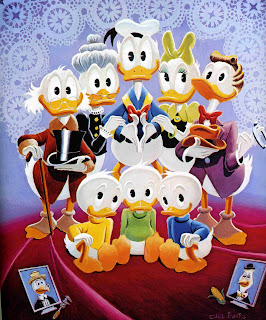 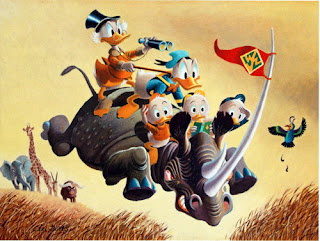 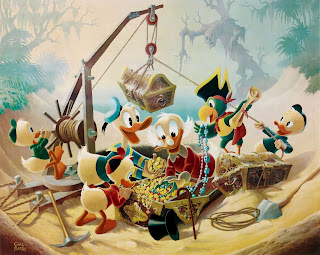 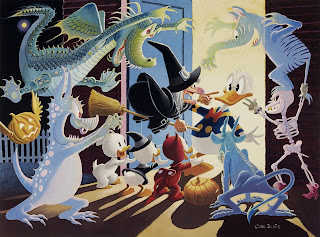 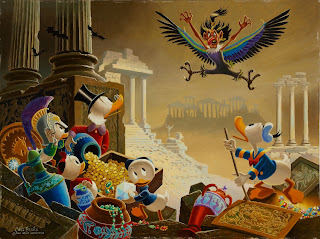 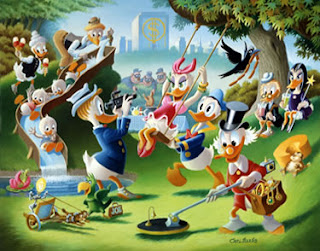 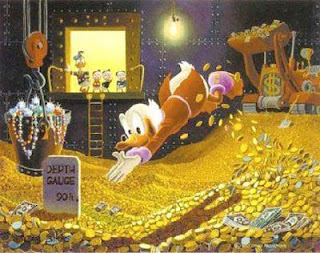 Today I'm spotlighting someone whom I consider one of the greatest graphic artists of our generation, Travis Charest. Travis is best known for his work on Jim Lee's Wild C.A.T.S. comic series. The guys line work is stuff of legend. Check it out! 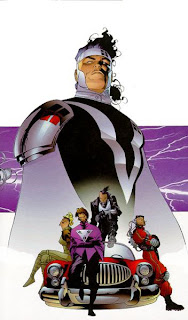 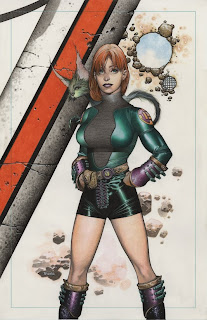 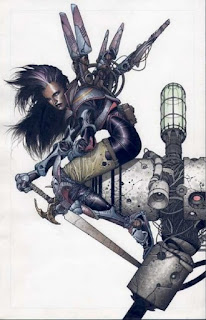 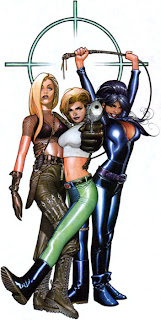 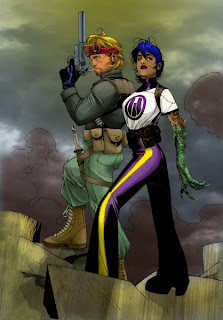 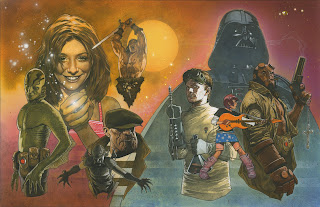 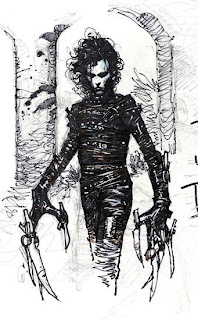 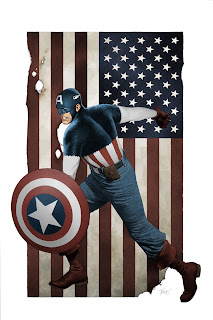 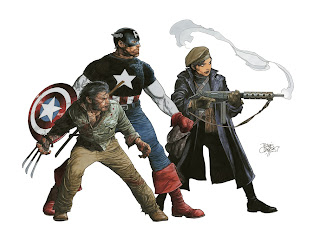 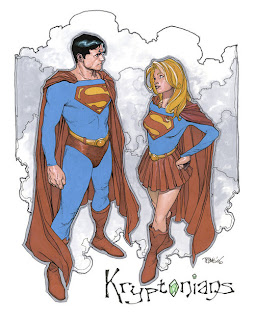 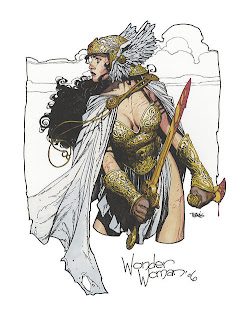 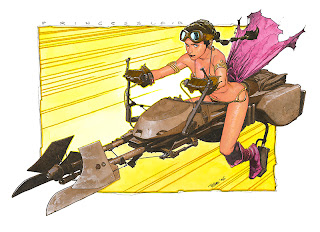 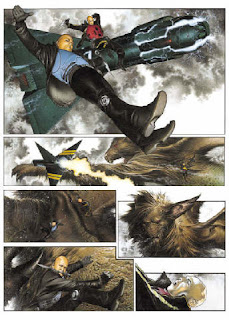 Posted by Brian James Fichtner at 12:29 PM No comments:

In 1953, Chuck Jones began a brilliant series of cartoons featuring a sheepdog and a wolf. The wolf is clearly a re-classified Wile E. Coyote with a red nose named Ralph, and the sheepdog was his pudgy and cunning adversary with a tuft of red bangs covering his eyes.

Sheepdog and wolf cartoons had been done before but what set these apart was how Jones presented them. After reading the 1934 Lewis Browne book How Odd of God, where it was stated that there are no judges, only people judging, no high jumpers, only people jumping high, Jones said. "So I drew the conclusion that there are no sheepdogs, only dogs who tend sheep during the day. They only become sheepdogs when they punch in in the morning." And so it was, each short would open with the two exchanging pleasentries then after clocking in for work, their day would pass with the wolf trying in vain to steal sheep only to be thwarted time and again by the sheepdog, then in the end a whistle blows, they clock out, wish each other a good night and return home only to return in the next cartoon to do it all over again. Brilliant concept by a brilliant man.

Happy Birthday to you Dr. Seuss!!! 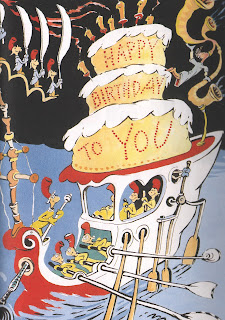 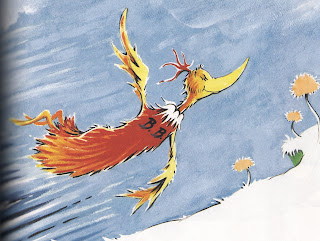 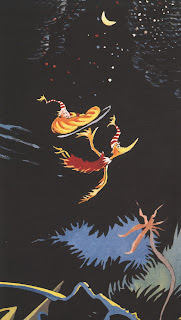 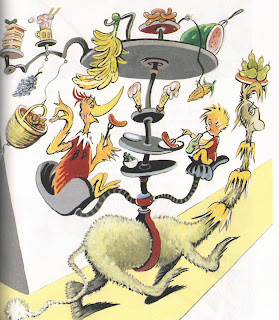 Posted by Brian James Fichtner at 9:28 PM No comments: