On this day in 1942 the worlds mightiest mouse, Super Mouse, debuted in the animated short The Mouse of Tomorrow.  After 7 cartoons, Super Mouse was changed to Mighty Mouse with the 1944 short The Wreck of the Hesperus and he never looked back. Paul Terry created the character as a parody of Superman and included all of his powers. In his theatrical cartoons, Mighty was never particularly popular, although more popular than any other Terry Toon character. It was television that made the character into an icon. In 1955, the Mighty Mouse Playhouse premiered on CBS and ran for 12 years, but through other outlets he remained consistently on television for over 30 years. In the late 1970's and early 80's, Filmation created new adventures in the aptly titled The New Adventures of Mighty Mouse and Heckle & Jeckle. But most famously, Ralph Bakshi revived the character in 1987 creating Mighty Mouse: The New Adventures for the CBS Saturday morning children's lineup. The series had a very adult themes and even landed its creator in hot water for a scene that was interpreted by some as Mighty snorting cocaine. The series only lasted for 2 seasons then the mouse of tomorrow faded into the background yet to be revived to this day. A Mighty Mouse CG animated film has been in production from Nickelodeon for the better part of the last decade and is currently slated for a 2013 release. Until then, the world eagerly awaits the return of the Mouse of Steel!!! 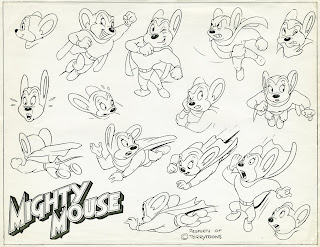 Posted by Brian James Fichtner at 6:36 AM