The biggest movie of the year...the decade...possibly ever is officially on its way in just a few days. That's right, the Avengers is finally here. If you haven't heard, you probably aren't from this planet.  This is perhaps the most ambitious superhero film ever undertaken. It all began with Iron Man in 2008 and ran through the Incredible Hulk, Iron Man 2, Thor, and Captain America and now it all culminates with the superhero team-up film The Avengers. So for the next week we countdown to the biggest movie of all time with a little background on the films heroes.

Today, we start with the films villain, the trickster god of lies and mischief and brother of Thor, Loki.  He first appeared in Venus #6 (1949) and was created by Stan Lee,  Larry Lieber, and Jack Kirby. Loki was a child of the Frost Giants taken by Odin after slaying his father and raised as his own. He grew up resentful of how Thor was treated better by the citizens of Asgard. As he grew older he honed his skills as a great sorcerer and as his power grew so did his lust for power. His penitence for mischief soon turned to evil and he began seeking vengeance on Thor for his greater favor. Loki would later cause the final conflict known as Ragnarök, sometimes referred to as "The Twilight of the Gods".  All the gods were destroyed and later resurrected...Loki in the form of a woman. Loki retained his male form after Ragnarok but hid himself inside the female body of Thor's reborn lover Sif in order to sell to Thor the idea that he wished to change. Combining his magic with Hela, Loki traveled to the past and set into motion events that led to his younger self being adopted by Odin. There's alot more of course but that should be enough to get you started..now keep checking back every day to learn more about the characters from the film. 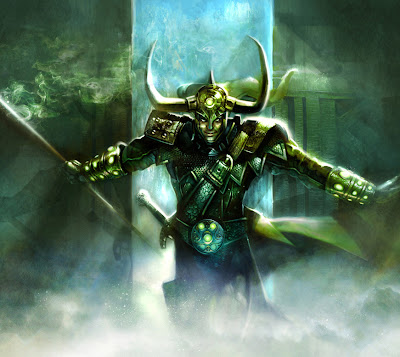 Posted by Brian James Fichtner at 12:03 AM