On December 5th, 1901 a baby boy was born in Chicago by the name of Walter Elias Disney. Disney is regarded as a legend in the world of animation and theme park design. Growing up in relative poverty, Walt, with the help of his brother Roy, built one of the most successful multi-media companies in the history of the world. He (with a little help from some of the most creative employees in history) created some of the world's most well-known characters including Mickey Mouse, for whom Disney provided the original voice. During his lifetime he won twenty-two Academy Awards from a total of fifty-nine nominations giving him more awards and nominations than any other individual in history (I like using the word history in this post don't I?). Overall, the guy was pretty amazing and is the reason we have fantastic vacation destinations like the Disneyland and Walt Disney World  theme parks in the U.S., and the international resorts Tokyo Disney, Disneyland Paris, and Disneyland Hong Kong. Unfortunately, he died of lung cancer on December 15, 1966 making the Jungle Book, Winnie the Pooh and the Blustery Day, and the Happiest Millionaire the last films he would work on. Happy Birthday Walt, you have made a mark on this world that can never be erased. 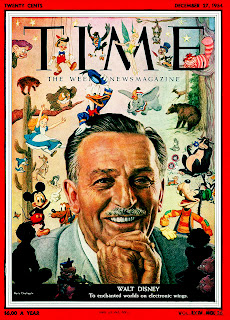 Posted by Brian James Fichtner at 2:10 AM