Today we start a new feature called Winsor McCay Wednesday!!! Every Wednesday (or most) we will be showcasing the talents of the incredible Winsor McCay (September 26, 1869 – July 26, 1934). His pioneering early animated films outdid the work of others of his day, and set a standard followed by Walt Disney and others in the decades to come. Thanks to his expressive graphic art style, his comic strips gained a wide fan following, despite an early lack of popularity, inspiring countless artists such as William Joyce and Bill Waterson. His best-known creations are the comic strip Little Nemo in Slumberland, and the subject of our first Winsor McCay Wednesday, the first animated cartoon character, Gertie the Dinosaur. 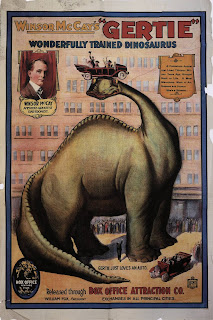 Posted by Brian James Fichtner at 1:09 AM