Today we celebrate the 71st birthday of Woody Woodpecker. He first appeared in the Andy Panda film Knock Knock on November 25, 1940.  The idea for Woody was reported to have come during Walter Lantz' honeymoon with his wife. A noisy woodpecker outside their cabin kept the couple awake, and when it started raining, they found that the bird had made holes in the roof. Walter wanted to shoot the pest, but his wife Gracie suggested he make a cartoon about it instead. Of course that story is highly debated since Woody made his screen debut prior to their wedding. Nevertheless however it happened, Woody was born from the mind of Walter Lantz and his trademark  "Ha-ha-ha-HAA-ha!" came from the incredible voice of the legendary Mel Blanc. After Knock Knock, Woody proved to be a hit and Walter now had a replacement for the fading Oswald the Lucky Rabbit, a character he took over from Walt Disney. Woody went on to great success during and after the war, going through redesigns and slight personality tweaks along the way. In 1948, the Woody Woodpecker song debuted in the cartoon  Wet Blanket Policy and went on to become his theme song. Woody successfully made the transition onto television in 1957 and continues to be ingrained in pop culture currently serving as the mascot for the Honda Motorcycle Racing Team and the Universal Studios theme parks. 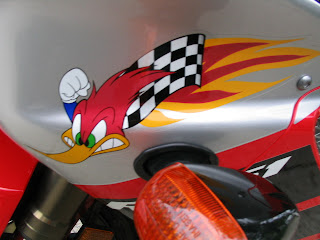 Posted by Brian James Fichtner at 5:55 AM